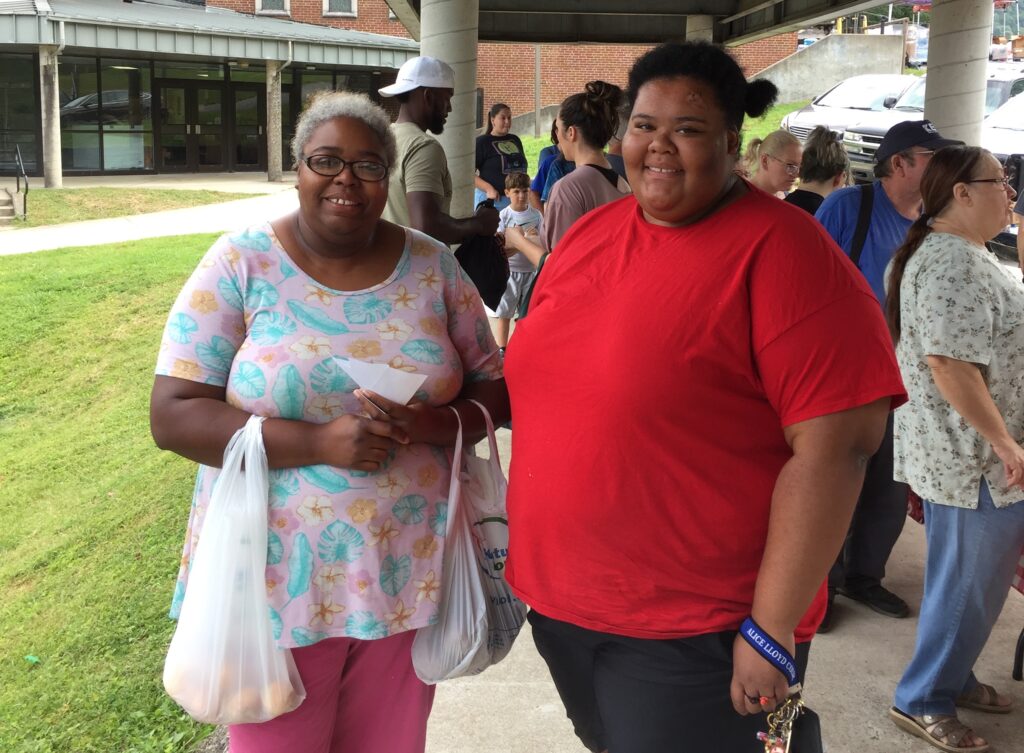 It’s hard to put into words just how devastating this summer’s flooding was, and continues to be, for eastern Kentucky. 43 lives lost. Thousands of homes damaged, if not completely destroyed. Thousands more lives, livelihoods, and whole communities upended, displaced, forever changed.

When a crisis like this happens, your blood sugar, or what you’re going to have for supper, might—understandably—be the last thing on your mind. But as Angela Maggard, of Letcher County, relates in this audio story, after the floodwaters crested, she was still human, after all— and she still had to eat.

And eating, especially eating well, is important to Angela. She has prediabetes, and type 2 diabetes runs in her family. And because making good food choices—along with getting regular physical activity—is one of the very best things you can do to prevent type 2, Angela typically tries to be careful to keep her blood sugar in mind with what she eats. But after the flood triggered a mudslide, and collapsed the road out—which trapped Angela and her family at home, for several days, without power or water—all bets were off. They had to survive on the canned foods they had on hand.

And whether it was due to this change in her diet, or the intense stress of the time, or some combination of a whole bunch of factors, Angela says she noticed her blood sugar levels starting to go up.

So when Angela was finally able to get out, finding fresh, healthy food was a priority. And on the day we met her, she was at the Letcher County Farmers’ Market, taking advantage of an innovative program at the market that was offering free produce after the flood, to anyone who wanted some, no questions asked.

As she says in this story:

“A lot of processed food is not good for you. And that’s kind of what they throw at you in a disaster… Produce helps to keep your [blood sugar] levels where they need to be, so that you can be the best for your family and those that might need you.”
Hear Angela’s whole story of dealing with the flood, and trying to eat well in spite of it all, by pressing play above. Or click below to read a transcript.

Music in this story was performed by Mark Fosson (“Chillicothe”) and James Blackshaw (“Cloud of Unknowing”), both from the Free Music Archive.

Click here for the full transcript of this story:
[ANGELA MAGGARD]: You’re just trying to make sure everyone’s okay, and you’re not really thinking about yourself. And I found my sugar to be dropping, and different things… Produce helps to keep your levels where they need to be, so that you can be the best for your family and those that might need you.

My name is Angela Maggard. I currently live here in Letcher County, in Craft’s Colly. And I’m originally from Knott County.

We were very fortunate. I work for Mennonite Central Committee, and they had a house, and we’re staying in that house, up in Craft’s Colly. Our house is in Sandlick, our original house.

The land around it was completely destroyed. And we lost lots of produce, because we were doing some at-home gardening, and we lost everything as far as that goes. And there’s molding, and stuff like that, that’s growing in the inside of the house.

[ANGELA]: We had some canned goods that we had gotten from the food pantry the previous week. So that’s kind of what we were eating for a couple of days, because we were trapped. We couldn’t get out. We had a mudslide that covered our driveway, and our road collapsed to get anywhere. So we just ate canned goods and things that didn’t require cooking, because we didn’t have electricity, or water, or anything like that. [INTERVIEWER]: They’re doing this program where there’s free food today. Is that something you’ve taken advantage of? [ANGELA]: Oh, most definitely. Because the electricity went off, we lost hundreds of dollars of food that we had. And the produce went bad that we had tried to take care of. We were hoping to be able to make our own items at home with tomatoes and such, and they’re rotted now, because of all the water and stuff that got up in there. So, yeah, this is very helpful.

If you had caught me a few minutes ago, I was standing in line crying. Because we’re very thankful. it means a lot that people would think enough to donate things to you to help your family—we have a family of 5. So it’s very helpful.

[ANGELA]: I’m prediabetic. And diabetes does run in my family, [along with] high blood pressure, and some other things. And I studied nutrition in college, so I kind of know the things you’re supposed to eat. A lot of processed food is not good for you. And that’s kind of what they throw at you in a disaster. So it’s very, very heartwarming to know that you can get fresh produce.

I really appreciate them having this here. Because before, it was kind of like— you’re kind of in survival mode. You’re just trying to make sure everyone’s okay, and you’re not really thinking about yourself. And I found my sugar to be dropping, and different things. And I’m trying to grasp at things that are healthy to eat. Produce, and that kind of thing, helps to keep your levels where they need to be, so that you can be the best for your family and those that might need you.

[ANGELA]: It’s kind of touch and go. Like, right now we’re ok. But in the future, it’s so hard to get enough money to buy what you need to buy. And I have a job, I have a part time job, and it pays fairly decent. But I know what’s available in the area. And sometimes it’s hard to get what you need to eat, and be able to afford it. Because the price is usually so high, that if you’re on a fixed income, you cannot afford to buy healthy, even if it is there.

We also went to our food pantry, which now is destroyed by the flood. And they were able to give us protein, like fish, catfish. And we would put it in our freezer. But all of those items got destroyed. So, it’s like starting over at ground zero almost.

And we’re thankful to have CANE Kitchen too, because they use local produce to prepare meals. So when we were able to get out, we were so, so thankful that they had hot meals that were good for you.

[INTERVIEWER]: Well is there anything that you wish kind of more people knew about what was going on right now? [ANGELA]: I don’t know—I think if they knew how much that neighbors are helping each other. And I don’t know if you see the behind-the-scenes. The children helping their parents. Like, I have my daughter, that volunteered many hours to help others. Even when we didn’t have the things that we needed. And just know that we’re fighting, and we’re resilient. And we don’t want hand-me-downs. We want a way to survive the long term. So, anybody that’s willing to help with that—that’s greatly appreciated.