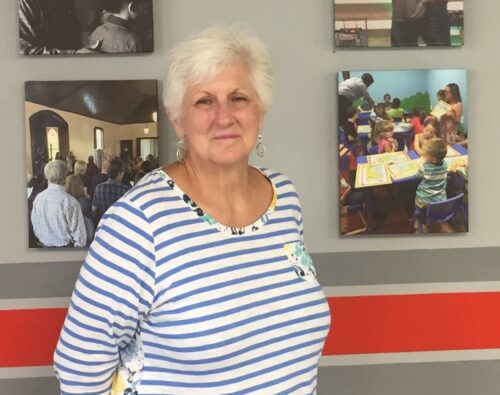 Sure, you might be at high risk for type 2 diabetes— you might even have it in your family. But that doesn’t mean that you have to get it, says Connie Godsey Duvall, of Cumberland County, Ky.

Connie is living proof: while she has had multiple immediate family members diagnosed with type 2, she herself has managed to avoid the disease.

Still, she says, she had long struggled with her weight. For years, she would try different diets, but they were all what she calls “yo-yo diets,” where you make a dramatic shift in your eating habits, and you might even lose weight for a time— but then you gain it right back.

In 2019, though, she signed up for the Diabetes Prevention Program (DPP), a small-group lifestyle change program offered through her health department in Cumberland County. And, Connie says, she immediately saw results: she lost 15 pounds in eight weeks, and eventually 25 pounds. And, most importantly, that’s weight she’s been able to keep off, she says, by keeping up with the changes the DPP preaches, including: eating smaller portions, counting calories and fat grams, and staying active physically.

And, Connie says, taking steps to lower your risk of type 2 is even more important right now, in the age of COVID-19: “Especially in the middle of this pandemic, if you were to actually contract it, when it affects your lungs, and you’re already struggling with extra weight… The Governor was saying, ‘Stay healthy at home.’ But my thing was— get healthy!”

Music heard in this story: “Twisted Road” and “Sometimes” were performed by Michael Chapman, and can be found at the Free Music Archive.

Instead of taking a chance on, ‘Well, my mom was diabetic, my uncle was, my grandma was— so that means I’m gonna be.’ Uh-uh. That doesn’t mean that you have to become a diabetic as well!

Well, my parents are originally from Perry County, from Hazard. And I was born in Powell County, Kentucky. I’m a retired Home Economics / Family Consumer Science teacher. So, I taught nutrition to my high school students.

And I’d taught nutrition; I wanted to be healthy all my life. But I struggled with my weight. I remember starting my first diet when I was 14: bananas and skim milk diet! You were supposed to lose five pounds in three days. After the second day, I didn’t want to see a banana again. And especially after going to college, and studying college nutrition, I knew more about it, and I knew I needed to make the right choices. But eating… we eat for so many reasons: our cultural background; our emotions; to celebrate; stress. So, I was a stress eater, an emotional eater, I’m sure is part of the reason I struggled.

And of course in our society, most people want quick weight loss: ‘Oh, I want to lose it really fast.’ And you can! And then what happens? You go back to your old eating pattern; you gain it back. And so that’s where I fell into that yo-yo, and so many people fell into that, ‘yo-yo dieting.’

In January of 2019, I started a walking program at the extension office. And I ended up with about… at first, about 20 people showed up. And so we started walking a mile, four days a week. I weighed 209 pounds, which was way over what I should weigh. And that was one of the reasons I wanted to start this walking program— I thought the exercise has got to help. Which it did, because I lost six pounds in the first month!

Well, when I’d lost that six pounds in January, I thought, ‘Okay, I’m gonna lose all this weight I’ve been trying to lose for years!’ Didn’t happen. I toned up; I had energy; I felt so much better. But I still had that extra weight. So, one of the health educators with the Health Department, they were offering the Diabetes Prevention Program in July of 2019. And she had also in her advertisements put, “Are you ready to get your weight under control?”

And actually, one of the first things we did in the program is we did a score-sheet of your chances of becoming diabetic—your weight, if you have family members. I was really, really high risk. Even though I felt safe that I wasn’t going to get it, there’s still that chance.

This Diabetes Prevention Program is a lifestyle change program. It’s not a diet. They want you to really change your lifestyle by thinking about your eating, and everything that you put in your mouth.

It was a year program. We would meet once a week for 16 weeks, and then we started meeting every two weeks. There was a lesson every week for the first 16 weeks, about counting calories, and counting fat grams, and what the healthiest foods were. And we had to start measuring— writing down everything we ate. We had to look up how many fat grams and calories was in each serving. If it was a recipe we made on our own, we had to look up each ingredient.

And I was just amazed— I was probably eating 3000 calories a day! You know, no wonder! Even with the exercise, no wonder I wasn’t losing weight. And like I said, I wasn’t eating deep-fried food. I tried to eat chicken, and fish, and vegetables; I tried to eat the healthy food. But I was just eating way too much. I wasn’t measuring.

And there’s so much hidden fat in food. And there are so many easy ways you can cut back on those fat grams. You know, instead of regular sour cream, you can get the lite sour cream. Instead of ranch salad dressing, you can get the lite ranch. Or just leaving the fat out completely— when a recipe, like a brownie mix recipe, calls for 1/2 cup of oil, you can use 1/2 cup of applesauce and make those brownies. And they’re just as good!

And the thing about the Diabetes Prevention Program, the one thing that makes it different— there is no food you can’t eat. There is nothing that’s off limits. You have to work the numbers into your daily goal. So, like, this morning, when I had peach cobbler for breakfast, for the meals later in the day, I’m going to have to eat salads, and… you can manage! If you know you’re going to a birthday party on Saturday, cut back during the week.

You know, a few times, I slipped. And a few of those weeks, I maybe gained a half a pound. But— you lose it slowly. You control how much you eat, you make the right choices, and the weight will still come off.

My goal with the program was to lose 15 pounds, and I did that in eight weeks. And I wanted to lose more, after I lost that 15! And I did end up losing 25 pounds, and then an additional three pounds. And… wow. People started seeing me out in public, and they’d say, ‘Wow, you look so— what have you done?’ And I’d say, well, I’m on the Diabetes Prevention Program. I’m just counting calories and counting fat grams. And I’m still exercising, I’m doing the walking program as well.

My father was a diabetic. And he had all the symptoms, and we didn’t recognize those. And he was an eastern Kentucky stubborn man that didn’t want to go to the doctor. And finally, he woke up one Monday morning and he couldn’t even get himself dressed. And so they took him to the hospital and found out that he was definitely diabetic.

And he did end up with an injured big toe, that had to be amputated. It would not heal. So he had to have his leg, below the knee, amputated. And then from that surgery and the hospitalization and being immobile, he ended up developing sepsis. So it wasn’t diabetes directly that killed him, but it was, you know, a complication of the diabetes.

Two of my sibling sisters also developed diabetes. One of them, she did not manage her diabetes very well, along with her other health conditions. So she died of a heart attack at age 63. Which should never had happened.

So, instead of taking a chance on, ‘Well, my mom was diabetic, my uncle was, my grandma was, so that means I’m gonna be.’ Uh-uh. That doesn’t mean that you have to become a diabetic as well! If it is in your family, then that’s even more reason for you to start making those changes before you have the damage to your body that cannot be reversed.

People need to realize that being prediabetic does not mean that you will become diabetic, if you can make those lifestyle changes. Especially in the middle of this pandemic, if you were to actually contract it, when it affects your lungs, and you’re already struggling with extra weight— just like me carrying that extra 25 pounds, that was harder, to me, to breathe!

I even went back to the radio station—they have a Talk Around Town program—and I actually shared this DPP, the basics of it. And I said, ‘You can do this at home. Start counting your calories and your fat grams; start moving! The Governor was saying, ‘Stay healthy at home.’ But my thing was— get healthy!

It’s been a year now; I’ve never varied over a pound or two higher than what my goal weight was. You know, I’m hoping to stay with this program and this lifestyle change. I’ve got two miracle grand babies, that— my daughter was almost 40 when she had the first one, almost 41 when she had the second one. And I want to be around to watch them grow up. I’m thinking I’ve got a good 30 years possibly out there, and I want to be healthy!