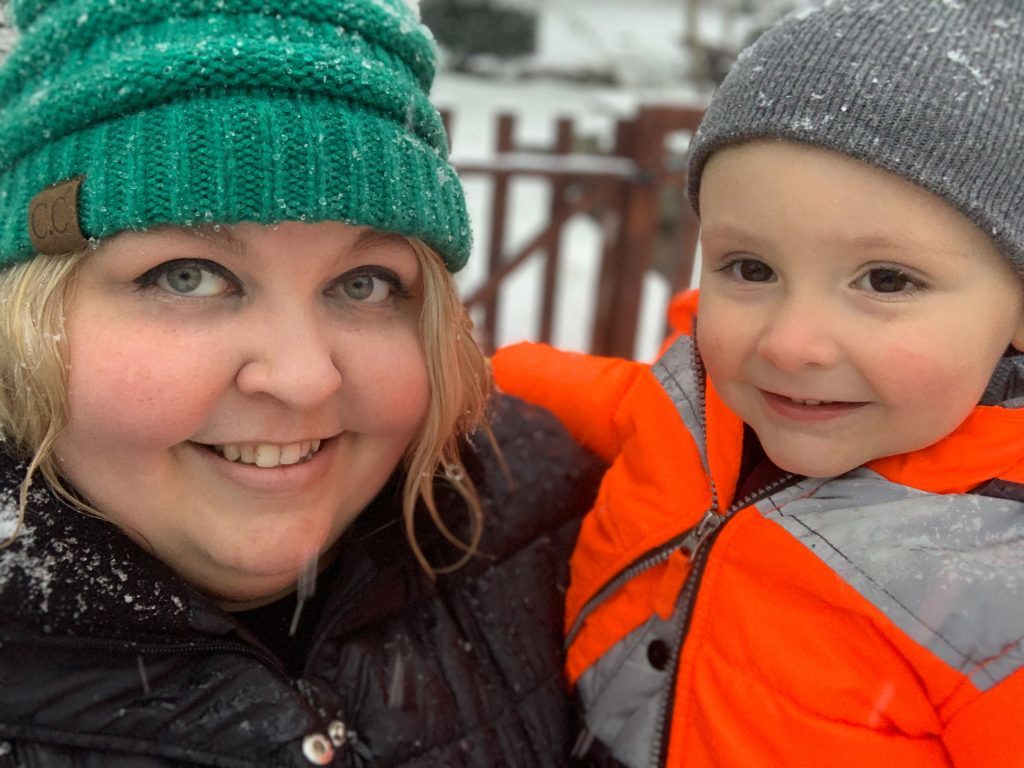 Willa Johnson, from McRoberts, Ky., says she has long dealt with several health problems that were never properly diagnosed. In particular, she had no idea she was in the prediabetes range until her blood glucose levels suddenly started rising as the result of a separate health issue: Polycystic Ovarian Syndrome.

In this piece, Willa talks about her efforts to try to prevent type 2 diabetes, particularly by re-orienting her diet around healthier foods; she also discusses some of the real obstacles that can exist in eastern Kentucky to finding those healthy foods and maintaining good health in general. Willa also talks about some of the unique challenges of healthy living while raising a child as a single mom, as well as the importance of being persistent, but also compassionate with yourself when it comes to food and health issues— she says no one is ever going to do everything perfectly all the time, but the one thing we that we can do is keep trying.

Music in this story (“Beware the Lone Star Tick” and “Traveling Riverside Blues”) was performed by Don Bikoff, and can be found at the Free Music Archive.

I think when we talk about diabetes, we talk about it in such a basic way. People don’t realize how easily it can change— how you might not be showing any symptoms and suddenly you do.

My name is Willa Johnson, I’m from McRoberts, Ky, and we are here at Appalshop where I work as Director of Appalachian Media Institute.

So, I’ve struggled my whole life with several health conditions that were basically just undiagnosed, but I never had issues with sugar or anything like that. But what I did have issues with was my period. And then, just the last couple years, I found out I had polycystic ovarian syndrome, and that’s where a lot of my health problems lie. And so I’ve been having a lot of issues with iron and anemia. And so, through the blood work of trying to get my iron levels raised, we realized that my glucose levels were on the rise. Which is, apparently, very directly related to polycystic ovarian syndrome, and I had no clue. So I wasn’t eating a diet that was, one, good for iron protein intake, but also wasn’t good for prediabetes.

Whenever my levels first started going up, the first thing the doctor did was put me on metformin. And I hate taking pills, I hate taking medication. And so I did it for a little while, and then it wasn’t making much of a difference— and I wasn’t taking them as regularly as I should. And so when I went back the second time, my levels were still high, and I was like, ‘I wanna talk about a diet. Like, let’s sit down and have that conversation. Don’t just up the medication.’ And so that’s when I started to notice a big difference. And I haven’t went back and tested my levels since I’ve done this, mostly because I started moving. But I can tell a difference in energy, I can tell a difference in how I feel. And so I can only imagine that it’s helped so far.

My doctor and I sat down and wrote out a diet for me, so she really sat down and we planned it out together. Like, it was a really simple thing: like, eat this many color vegetables with each lunch. And then, at dinner, it’s mostly protein, and vegetables that aren’t red, orange, or yellow— those are your higher-starch vegetables. So just thinking more greens, less yellows on the plate.

It is a little challenging, especially when… the only other person you‘re cooking for in your house won’t eat meat, and also doesn’t want to a lot of vegetables. So, you know, moms struggle a lot with food and what they eat for a reason: it’s really hard to cook a good meal for yourself, and cook a good meal that a child will eat. And so, those things are challenging; things like— if you’re at work, and everyone wants to go out to eat, and you’re in an area like this where there’s not healthy options to go out to, things like that become a challenge. But, I think for me, it’s mostly planning. I try to spend Sundays, as much as I can, spending time thinking about what I’m going to eat that week: mapping it out, going to the store, cooking things, prepping things. It sucks, it takes up your entire day. But those are the weeks that I do the best and feel the best. So, it’s just an investment.

The town I work in and the town I live in are pretty much 30 minutes apart. Which doesn’t feel like a lot, but it is after a long day. Just the other day, I really wanted to cook a good, healthy meal at my new house, and I didn’t want to drive 30 minutes to Whitesburg, so I went to the Neon grocery store— and there was no fresh food to buy, other than potatoes. I couldn’t buy bananas for him, the strawberries were rotted, there were no good peppers… just getting to get to a store that has good produce is a big problem for people who aren’t living in the county seat.

And especially when you have a kid: you‘re putting them in the carseat, you’re packing all their things, you’re getting them out. Especially for moms—or parents in general—who do it alone, all those little things are just so exhausting if you do them repetitively, all the time. I joke that sometimes I hire babysitters to go to the grocery store, and that’s legit the truth.

Also, both of my parents are diabetic, and they’re both type 2 diabetic, and I think they’re from a generation that— they grew a lot of their own food, but they also were the generation that was introduced to a lot processed food. And so they think anything out of the garden is healthy, and they also think anything that says ‘sugar free’ is healthy. Or just not understanding that sugars and starches are very similar. And so they’ll say, ‘I haven’t had any sweets today,’ and I’m like, ‘…but you had potatoes today!’

But I think, nationally, we’re just really unhealthy. We want everything quickly, we want everything to last a long time and not rot— we want the processed stuff. It’s this weird, like, body-blaming game of, ‘only the overweight have this problem, and it’s their fault, they’ve done this to themselves.’ The truth is, we’re all taking in all of these substances in our diet that cause our bodies to over-produce insulin, or under-produce insulin, you know— if you’re eating a mostly-processed diet, chances are, even if you’re not prediabetic, you’re gearing that direction.

I think that’s one thing I’m just so self-conscious about is watching people in my family take a handful of medication every morning or every night, and just thinking, like, there has to be a better way. And I don’t know that we’re doing a good enough job teaching younger people different than that: that you don’t have to live this way because your mother, or your grandmother, or your grandfather lived this way. There are things you can do—or you should demand your community help you do—to have a better life than adding another prescription.

Anytime the conversation goes to food, or weight, or diabetes, I immediately get uncomfortable. I immediately shut down. And I think a lot of people probably feel that way. Especially, I mean, young girls, so much of what we put on our value is our appearance. And we don’t want to talk about it. And so I see young girls continually beat themselves up, or say, ‘I’ll take whatever medication you give me because there’s nothing I can do about this,’ instead of saying— ‘you’re going to mess up. You’re going to make mistakes. It’s not going to be easy. But let’s try to do what we can do.’

And so, I think you’ve got to find what’s best for you, but I think there are healthy versions of diets out there for everyone. Going and asking your doctor to take your blood levels and to then decide from there— I had no idea that I had, like, almost zero protein. And then I think just being really easy with yourself when you mess up. It’s not all or nothing. My favorite quote that I use for people who are struggling with this is: ‘if you miss a step, you don’t throw yourself down the stairs.’ So, if you have a bad day, you don’t just throw in the towel, you keep going. Do the best you can. Make mistakes when they happen. But I think being gentle with yourself and easy with yourself is the best thing I could give anybody information to do.