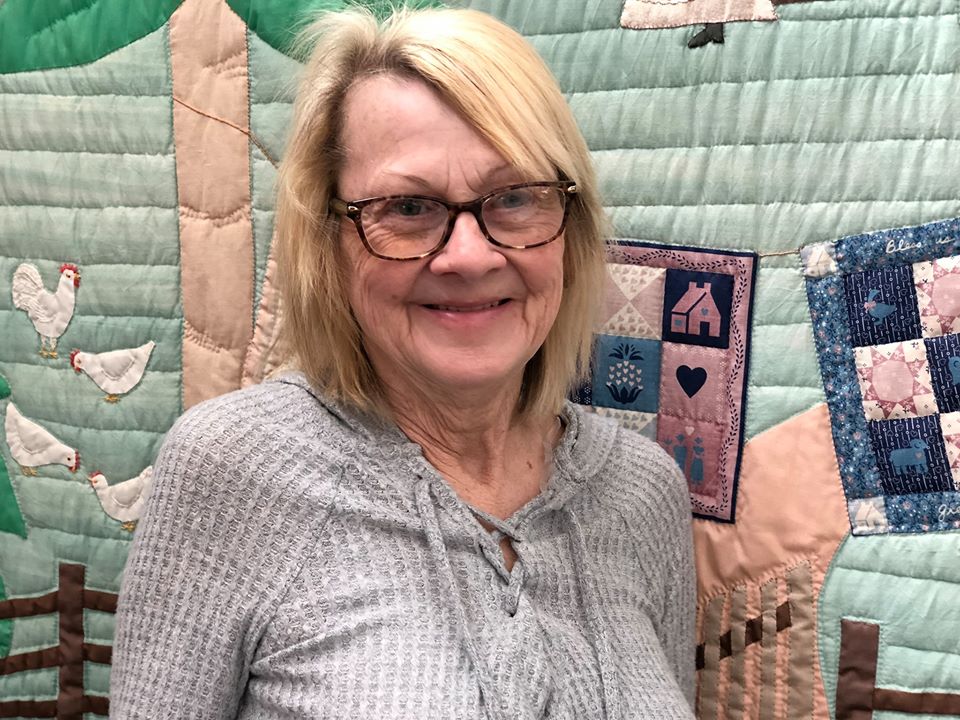 Patsy Adams (at right), of Letcher County, Ky., grew up surrounded by family members who suffered from type 2 diabetes, but she didn’t realize she herself had it until it was almost too late. In this audio story, Patsy talks about the “hard road” she has traveled since, including multiple scary bouts of ketoacidosis and constant daily attention. She also discusses lifestyle changes she’s made to help manage her diabetes, including getting exercise by walking the hilly roads near her house with her grandson. And she encourages listeners to get their A1C (or “blood sugar”) levels checked, so they can take action to prevent or slow down the disease themselves.

As Patsy says: “It’s no fun, I wouldn’t wish it on my worst enemy. Go get it checked! It ain’t gonna hurt.”

I’m Patsy Adams, and actually I was born & raised right outside Whitesburg on Cowan. Everybody knows around, in the area, I’m a diabetic. And they know the road, how hard it’s been for me.

I always knew that [diabetes] was a possibility, because, you know, my mother, that’s how she died, from being a diabetic. It ended up taking a toe off, a foot off, and then a leg off. And she died after that. And my grandmother on my Daddy’s side was a diabetic. And what I remember, staying with her—every summer, I’d get to go stay with her, and I loved it—at the store across the road, she’d get me to go buy her a Diet Rite. And I’d never heard of a Diet Rite, that was the first diet cola that came out. And I remember, she wouldn’t eat everything that we ate.

So I knew it was a possibility I’d become diabetic. Kinda watched it, kinda didn’t, you know. And in the last month before they diagnosed me as a diabetic, I was actually sitting here at work, and it got to where I couldn’t tell who was at the front desk until I heard them speak. I couldn’t see them well enough to know that. Being diabetic is very, very hard on eyesight. And thirsty—oh my gosh, I drank all the time! And I’d always heard that, too, so these are symptoms I’d always heard of.

Well, I ended up, it came to a weekend, and I went to the movies with my children… and when I got in there, I said to my daughter, ‘I can’t read the concession board up there.’ I said, ‘I can’t see that good enough.’ So she read what you can get, and after the movie, we came home, and I went in the house and laid down. And, for some reason, they came back to get something, and I was almost in a coma. So my granddaughter carried me out to the car, and they took me to the hospital. And my sugar was so high, they couldn’t read it on the meter they had. And my doctor was totally amazed, because I’d been to see him a couple weeks earlier, and he said it hadn’t shown any sign of being diabetic at that time. But they did say that if they hadn’t brought me on that day, I could’ve went into a full-blown coma.

Mine, I’m called a brittle diabetic. When I was in the hospital, they said, ‘I’ve never seen nothing like you.’ She said, ‘your sugar will drop real low, and I’ll give you a little something to make it come up, and it’ll go sky-high.’ She said, ‘I don’t know how you control it,’ and I said, ‘I don’t. I work with it 24/7.’ For a diabetic day, for me: I get up, check blood sugar. If it’s high or low, that’s how I determine my insulin. If I need insulin before I eat if it’s high, I’ll go ahead and do that. If not, I eat, then check it again, and do another test. It’s continual watching: do same thing at lunch, do the same thing at dinner, take a shot before you to go bed… And I can’t buy anything off a shelf that I don’t read all the ingredients on it. You have to read everything. Because, oh, it’ll say ‘sugar-free!’ Then it’ll say ’30 carbohydrates.’ Okay, better not get that! So much food turns to carbohydrates. Carbohydrates turn to sugar.

It destroys your whole body. Being a diabetic eats all your organs up. And I went into what’s called diabetic [ketoacidosis]… twice. It’s— your blood sugar has got so high that it has to get out of your body. And the only way it can get out is through— it’s not pretty to talk about, but you won’t even know you have to throw up, and you just throw up and throw up. And both times they’ve told me, ‘A few more hours, and you probably wouldn’t have been with us.’

Now I can tell you another story about insulin: it is outrageous. And that’s one of the reasons one time I went into that diabetic [ketoacidosis] was because I couldn’t afford to get my insulin when I ran out. It was, like, $147. And I just didn’t have $147 extra to give them for that insulin, so I thought, well, ‘I get paid in a few days, I’ll get it…’ Well, by then, I was already in the hospital. So once you are actually on insulin, you have to have the insulin or your body will shut down.

Sometimes I get so disgusted with it, it seems like no matter what I do, I can’t get it to do what it’s supposed to do. But, like, right now, I’m feeling better. I do more walking than I used to do, trying to eat right. I was having anxiety attacks, I’m not doing that anymore. And where I live, over, in and out of that holler, me and Jackson was walking this morning—my grandson—and I said, ‘Wow, it’s cardio, because you go up one hill and down the other!’ But yeah, I can do more stuff and I feel better about it. It makes a difference with anybody—eating healthy helps anybody. And we say, ‘Well, in the olden days, my family, they ate fatback and every meat, and all that unhealthy food—but they also worked from daylight ’til dark! People’s lifestyles get so busy that it’s easier to run through a fast-food place and grab something [than] to go home and cook. But it’s certainly not better for you.

My dad’s mother, she was a pretty bad diabetic, but she was lucky enough not to lose limbs. And that’s my biggest fear too: my eyesight, and my limbs. I think of that often. So for people, it’s very, very important, even maybe if you don’t even have the symptoms, ask your doctor sometime, say, ‘I’d like to check and see where my level is.’ And they do a very simple blood test called A1C. And that’s the only way you can really know for sure. There are symptoms once you are a diabetic, but it may not happen until you really are. If you get checked and they can tell you’re already a prediabetic, start now: exercising, watching what you eat. Let’s catch this before! Because once I got the symptoms, of my eyes bad, and me drinking and stuff all the time, I was already a diabetic. Like I said, I knew there was a possibility, but I didn’t realize how simple it was to find out.

I guess I’m bad, because people will say, ‘I drink all the time, I’m so thirsty,’ and I say, ‘have you had your A1C checked!?’ I’m real bad to do that. Go get it checked, you may be a prediabetic! You may be a diabetic. It’s no fun, I wouldn’t wish it on my worst enemy. Go get it checked! It ain’t gonna hurt.